When coming from Germany, the first impression of Beijing’s traffic was horrible. Driver drive like crazy: using signal-horn all the time, dangerous overtaking, not big fans of seatbelt and a very reckless driving especially towards pedestrians.

You can also see a wide variety of car brands: From Chinese local brands, over American to German ones. Most roads are very big, even “smaller towns” (500k residents) have most roads with 3 lanes. In Germany, a 3-lane roads means, you can drive 50 or 60 km/h. Not so in China. Sometimes, a 3-lane road have a speed limit of 30km/h. Usually, pedestrians are walking over any time. In addition, I saw a lot of wrong-way drivers - cars, bikes, carriages. So, the average speed is relatively low.

In contrast to Germany, one does not refuel by himself, but waits for service staff to do it and pay him afterwards.

Governmental authorities try to face the problems with different approaches: 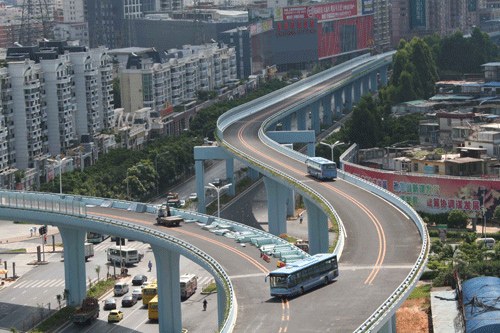 Meanwhile, the people are looking for affordable alternatives with the flexibility of a car:

When thinking of China, many western people still having a bike nation in mind. 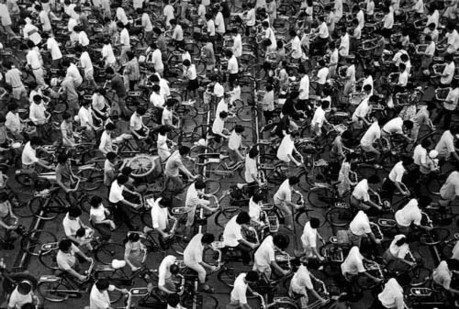 This has changed (at least in the cities and towns I visit in Eastern China). Now, motor-bikes and e-bikes are dominating, because they are a cheap way for individual transport and more suitable for a big city without too many parking sites and traffic jam. In big cities, gasoline motorbikes are usually forbidden to improve air quality. Here, the e-Bikes are very dominant. They are really cheap, starting from 200 EUR (knowledge.wharton.upenn.edu). Unfortunately, they can not be imported to Europe or US due to safety regulations.

But this leads to new problems. There is no driver license required to use them, which leads to very dangerous drivings. And the e-Bikes are almost silent and driving on the walkway, so they are a real danger for pedestrians. Nevertheless, they provide a good way for mobility for lower and middle-class city residents.

On the countryside, most people have a gasoline motor bike, because of it’s higher range and more power when running up hills or transporting stuff.

The highways have a speed limit of 120km/h.

Like many countries, Chinese highways are charged with a toll. Especially for Chinese standards, the toll is relatively high with about 0.3 to 0.7 RMB per kilometer (about 4-8ct / km).

So, many highways are relatively empty. Additionally, I saw a lot of trucks on the emergency lane, trying to fix the engine or something. This is the first indicator for the poor condition of the trucks here. Another one was fire I saw while a truck uses the brakes. So, after downhill roads, there are often some runaway ramps, to “solve” that issue.

Several days ago, there was a bus driver killed be a truck’s exploding brake, which was quite a big topic in the Chinese media. Some weeks ago, a small car was crushed by a downhill driving truck, which could not brake (Video). The reason for the truck’s braking problems are

For personal transport between cities, using train is the overall better alternative. For example, using the fast-train between Xiamen and Fuzhou (about 270 km) is only about 80 RMB, so 10 EUR. A little strange is the security check: Here, getting into the train feels like getting into an intercontinental flight. First, your baggage is scanned and you pass a metal detector. Second, you also need your passport to buy a ticket. Third, you need to show your ticket several times: Getting into the train station, getting into the waiting hall for the particular train and lastly, using your ticket, to leave the destination train station.

The main reason for the reckless driving of buses, trucks and cabs is the very low earnings. Most of them are under a lot of pressure. Like taxi driver, which work in 12h shifts and share a car between two people. They earn not very much, so driving faster is one way to increase their low income a bit (see also chinadaily.com).

One interesting fact: China and Germany both have almost the same number of car accidents and people injured. But the number of people killed through car accidents is 17 times higher (Wolfram Alpha 2006). I think, this is because of the mentality of not using seatbelts, a overall worse condition of the cars and more car-to-pedestrian accidents.